Synergy SKY is one of several offshoots from former Tandberg employees, who in the later years have seen strong growth within video conferencing. Different from Huddly and Pexip, who focus on smart conferencing cameras and technical challenges underneath the hood, Synergy SKY cares about the end-user.

The company had a year-end net result of NOK 10,7 million in 2019, which is doubled from the year before.

“We are selling a very popular software. By increasing the revenue, we increased the margin,” says CEO Ståle Reitan.

Strong growth in the US

Synergy SKY work to get the nearly four million various video conferencing solutions worldwide to talk to each other. The company’s solutions are often sold through technology partners and IT consultant companies such as ATEA. Reitan explains that the company has had a growth strategy over several years which has given particularly good returns in 2019.

Last year 95% of the revenue came from software licenses from overseas, mainly the US.

panies, among them Dell EMC.

Synergy SKY’s Norwegian numbers mirror mainly the Norwegian operations, but also compromise parts of the numbers from the American division through internal purchasing.

“The American operations has to purchase from the Norwegian,” Reitan says. 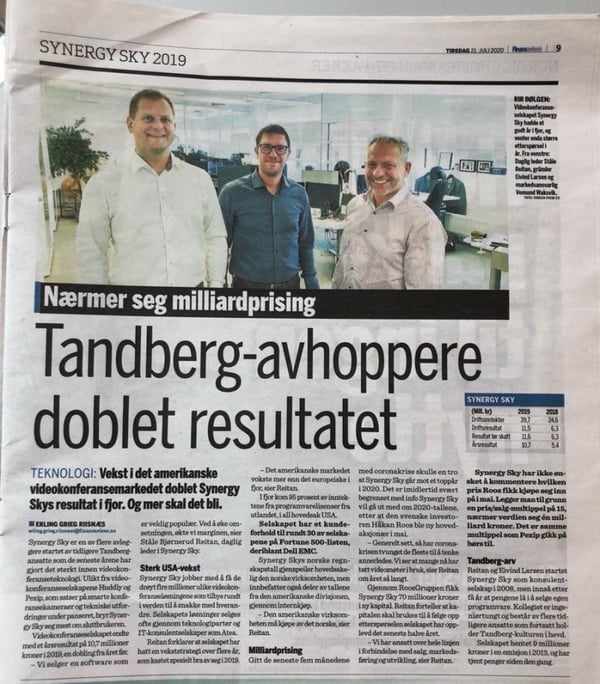 Given the latest five months with the global pandemic, we can imagine that Synergy SKY is facing a record year in 2020. However, the information Synergy SKY is interested in releasing about the 2020 numbers is limited after the Swedish investor Håkan Roos became principal shareholder in May.

“Generally speaking, we have seen that the pandemic has forced most to think differently. We see that far more are making use of video conferencing,” Reitan says about the year so far.

Through the Roos Group, Synergy SKY got NOK 70 million in new capital. Reitan explains that these funds will be spent on following up the demand the company has seen over the last 6 months.

“We have employed across the entire board in relation to sales, marketing, and development,” he says.

Synergy SKY does not wish to comment on what price Roos bought into the company within May. Based on a price/sales multiple of 15, we are getting close to one billion NOK. This is the same multiple that Pexip went public with.

Reitan and Eivind Larsen started Synergy SKY as a consultant company in 2008 but quickly realized that there was more profit in selling their own software. The team is heavy with engineers and consists of several former employees who still keep the Tandberg culture alive.

The company raised NOK 9 million in a share issue in 2013 and has been making a profit ever since.

This is a translated version of the news article published in the Norwegian financial times "Finansavisen"
July 21st 2020.